Jet, our youngest Dog is just about two now, and her Mum, Daisy has been a very bad influence on her since she was old enough to scamper about the place.

Daisy, who has undergone extensive shy Dog Training has never been shy about one thing, if she has her little side-kick with her she will run away and take Jet with her.

I don’t mean for half an hour, I mean for a day, and her record is for about 36 hours during the worst snow storm I have seen for 30 years. This was one very unhappy and very worried Dog Blog owner at the time. 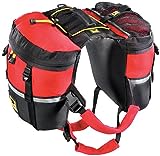 Take A Look At The Full Range On Amazon HERE

If she is off the leash with Faye then she won’t run away. If Jet is off the leash and Daisy on it then Jet will not run away. But if Daisy is off the leash and Jet too, and I mean even for a second then the little buggers will be gone. Now, living in the middle of nowhere surrounded by amazing countryside means that they have plenty of places to go, and they are not going to get hit by cars or anything like that, but they will be worrying wild mountain goats and run the risk of encountering very dangerous wild boar, not to mention the dangers of cliffs, gorges and the fact that it is behavior that is not to be accepted.

We had kind of resolved ourselves to the fact that we could only stop Dogs running away by always walking with one of them on the leash, this solves the problem entirely of course. But sometimes it is nice to free up your hands and simply stroll about with no Dogs on the leash. So we finally took a look online and bought Daisy a cheap Dog Backpack.

It worked like a charm. We got it a few days after ordering and straight away we loaded it up with some very important tins of tomato puree, called Triturado here in Spain. Now this triturado comes in nice big tins so one each side of the backpack weighed it down reasonably. It was then Daisies very important mission to take the triturado up the mountain on our usual walk and bring it back again.

She got her technique down pretty quickly and was soon just walking along with us at a steady pace without any attempt to do a runner with Jet. It meant that Jet could scamper about on her important missions to see what was hiding in the woods that needed chasing and from the look on the face of Daisy she was more more than happy to be on her important carrying tins of tomato juice mission.

She has not once tried to run off with Jet, she is happy having an important job to do that makes her feel special.

It has totally stopped her running, it has stopped her trying to get her little side-kick to go off on some crazed day long Dog mission, and it means we get nice relaxed walks with all three girls off the lead.

If you want to know how to stop Dogs running away then a cheap Dog backpack for sale from Amazon at a low price may well be the answer that you have been looking for. I wish that we had tried it ages ago, I simply can’t believe how well it works. Even if your Dog does not like to run off this is a great item for giving them a job to do and it will also burn of plenty of excess energy as you can simply add weight to suit their needs.

Take A Look At The Full Range On Amazon HERE

They are very cheap and may be the answer that you have been looking for. I can’t believe how well it worked and that we found the perfect way to stop Dogs running away. But before you take a look at them here is a little video we made on her first outing.

Daisy On Her Important Tomato Mission from Dog Blogger on Vimeo.

As you can see this was the first time that she had it on and we were unsure just what would happen. But Daisy Dog was more than happy with her tomato sauce mission and in the month or so that she has now been wearing it she has not once tried to run away. She goes a few paces in front of us but always stays close, and to be honest this is a miracle, especially when Jet is close, you saw a little bit of Jet in the video.

A Dog Backpack really does seem to keep them focused on the job at hand and it seems to make them feel important and as if they are special. I really do recommend it to anyone that wants to keep a Dog by their side rather than running away and it is certainly the answer to problem Dogs that are hard to contain on the leash as well.

Make them feel special and give them a job to do, and stop Dogs running away.

11 Responses to “How To Stop Dogs Running Away: Cheap Dog Backpacks!”