Today we have a guest post from Reed. To be honest I never knew microfiber Dog towels existed, but they do sound interesting. Read on to see why they may be useful and for information on what exactly they are:

To effectively answer that question lets first look at what most people use as a dog towel. What do you currently use? An old beach towel or blanket? Perhaps an old t-shirt or dish towel? Most people use something old and worn out for a dog towel as sort of an afterthought for drying their dogs off. Using a microfiber dog towel changes all that as you’ll see below.

Now all of the dogs I’ve owned hated to get dried off. My current best friend thinks it’s a game every time I go to dry his paws. He likes to bite me or the towel as I struggle to clean him up. And for the last 4 years I had been using an old towel that didn’t really do a great job so needless to say this was a chore neither of us looked forward to.

Then about 6 months ago I was given a microfiber dog towel as a gift. I thought it was a kind gesture and nothing more until spring rolled around and every time my dog came in I had to dry him off. I was amazed at what a difference it made. The towel is light and fluffy and looks more or less like a normal towel, but when it came to drying the dog it would soak up the water from his paws and fur incredibly fast. And thoroughly. My dog is an American Eskimo and has a lot of fur, so when he would get soaked, he would get SOAKED. The microfiber towel could handle all the water leaving Juneau a fluffy puff ball. Best of all he didn’t know what hit him. I could dry him faster and more thoroughly with the microfiber towel for dogs; avoiding the tug of war that eventually broke out. 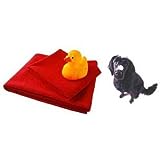 Another benefit of the microfiber dog towel is how quickly it dries off. This is a unique property of microfiber; that water will evaporate from the towel quicker than regular towels. This is incredibly helpful on rainy days when your dog wants to go outside just long enough to get wet before coming back in again only to want to go back out 10 minutes later. My old, beat up towel would only be good for 2-3 cycles of dog drying before it would be thoroughly soaked. And I would never remember to get a new one so I would have to run to the closet to get a fresh old crappy towel while Juneau would escape all over the house. I don’t worry about any of this now.

As you can tell, I’m a big fan of microfiber dog towels. They absorb more water, they do it faster and more thoroughly than a regular towel (which is especially great for dogs with thick undercoats) and they dry off quickly. Now I only have one dog, but I can imagine that these are twice as useful if you have more dogs (like the owner of one of my favorite Dog Blogs perhaps?) as you will require fewer towels. In fact, microfiber towels for dogs are especially handy when traveling. If you take your dogs with you camping or to the beach, one large dog towel should be able to handle even three dogs and you can throw it over the back seat (or wherever they sit).

Thanks to Reed for the article. I think something like this would have been perfect for us, especially when we lived in the UK and had a constantly wet Dog and beige carpets to deal with, not a good combination. Has anyone been converted? Or do you already use a microfiber Dog towel?

4 Responses to “The Benefits of a Microfiber Dog Towel”